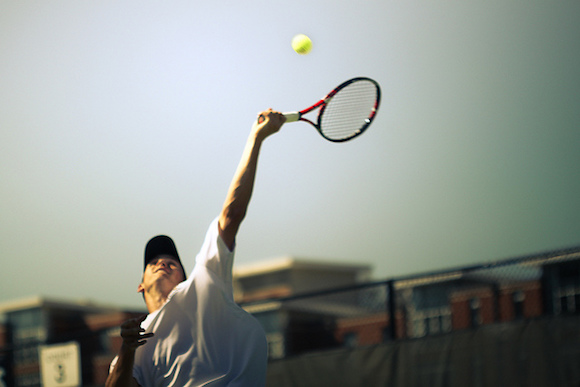 Tennis has been an integral part of my life for the past 7 years even after stopping for nearly two years.

The majority of my best friends from high school were on the team with me and the sport brought us all closer together. We spent four years on the courts practicing together. Winning together. Losing together. And our bonds became stronger thanks to it all.

When I moved to Arizona in 2012, I immediately made two great friends through tennis, both of who I still keep in touch with today. In fact, I was just out playing with one of them last Friday night, along with several others I met through tennis before we headed to our usual Korean BBQ restaurant for some good food and karaoke.

Picking tennis back up a couple months ago was one of the best decisions I’ve made this year. Getting back into it, I’ve made even more good friends and am in better shape now than ever before.

And for all of this, I’m grateful.

But tennis isn’t always strawberry shortcakes and Golden Retrievers for me.

I become someone else, something else, when I’m on the court and not performing at my best.

I become less friendly and I swear to myself when I hit a serve out. I verbally abuse myself when I hit a forehand to the net. I beat at my shoe with my racquet when my legs don’t move into proper position for the backhand that sent the ball flying against the fence.

My body tight, I can see myself making more and more mistakes before the match is over, ending with my defeat.

Most matches that I lose aren’t because of the person on the other side of the net. More often than not, it was because my mental game slipped and I began making unforced errors because of what’s going on in my own head.

I let the mistake I made 30 minutes ago stay with me and I fixate on what went wrong when I should’ve been present in the point I’m playing now.

After reading The Inner Game of Tennis, I realized I had to get out of my own way. Mentally.

Don’t let my mind constantly try to correct for mistakes or pay too much attention to tweaking small movements. My body knows what to do. I’ve played for more than half a decade, it doesn’t need a primer on a basic stroke I’ve swung thousands of times.

Don’t think about all the mistakes I’ve made in the match. There’s nothing I could do about a point that has already been lost. The only thing I can influence with any sort of control is how well I play on this point and the next.

Just trust myself. Trust that my body knows.

And ever since I’ve stepped out of my own way and began thinking less on the court, my body suddenly feels lighter and more fluid than ever. My shots are going exactly where they should be going.

As with all things in life, I just had to get out of my own way and stop overthinking it.

Things always flow better when your head’s clear, both on and off the court.