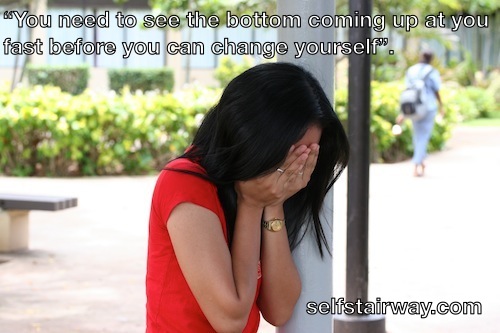 This is a guest post about hitting rock bottom by Chris Grimm. Let him know what you think in the comments!

Every person has a time in his or her life where everything seems to just go to shit. There may be a giant build up that ignites from one catalyst or they slowly sink into it as if they’re in quicksand. You eventually go to what is known as “Rock Bottom.” The good news is that you can come out on the other end a much better person if you are self-reflective.

My experience was a giant build up and with a huge explosion that was followed by what the worst period of my life to date. I had a friend who I considered my brother. He had introduced me to my first girlfriend, taught me everything I know about business, and we shared many amazing times.

I would have done anything for him and I’d rather have lost my left arm than part ways with him. What happened?

I was an obnoxious douchebag that took him for granted and we gradually grew apart. Tensions built up although I hardly noticed it. Eventually, he stopped returning my calls.

Now he had my attention. After weeks of this he finally picked his phone up one day. At the time I assumed it was his fault and launched my verbal blitzkrieg.

“Why aren’t you answering me? What’s going on? WHY are you being a douchebag?” I was about to get torn a new one. He responded, “Chris you can be so annoying at times that I just want to punch you.” Then he began to listen all the reasons why he wanted to assault my face. In short I was being a terrible friend and I was unaware of it.

At the time I assumed it was a fight and we’d go back to being the best of friends. We both agreed to meet to talk before he moved – I wanted to make amends and not have a good friend move while angry. Once again, I was wrong. He sat me down and basically said, “This friendship is over.”

The stages that followed were hard. Initially I had disbelief, followed by an extreme anger. Last was sadness, like I lost a family member. Now, it’s just a melancholy feeling that I could be so stupid as to mess this up.

Whilst all this was happening, life moved on. My good friends Xavier and Andre both moved. Andre deployed to Japan with the Navy and Xavier moved hundreds of miles away. In a few weeks I lost three of my best friends.

In the months that followed my life was a downward spiral of depression. I drank too much. I gained 30 pounds. I got cut from my college wrestling team. I neglected school and was put on academic suspension. My successful contracting company directory and my blog failed. This was me hitting rock bottom.

Eventually, I clawed my way out with the help of my friends in ROTC and a good friend named Steve. I went through Hell and came out on the other side with the following lessons learned from hitting Rock Bottom:

1. People are always trying to tell you something, make sure you pay attention

Looking back, I missed a whole lot of signals of the impending storm. If I had paid attention, maybe we’d still be friends to this day. Whether or not they say it with words, you can always tell what a person is thinking. Make sure you listen.

If you pay attention and start to see these signs you shouldn’t ignore them. Don’t proceed as if nothing out of the ordinary is happening. Sit down with this person and have a talk. Stay civil and don’t yell at them. Maybe you can still work this out.

Some signs may not be so obvious. Your friends may stop going out of their way to hang out with you when they used to do so all the time. That’s a sign (unless they’re genuinely busy.) Others may be more obvious such as their tone of voice or the words they decide to use.

2. You need to maintain self-awareness at all times

Number two ties directly into rule #1. Nobody is perfect; we all have something we can improve on. Always keep an eye on your actions and ask what could be consequences of them. Have the self-control to stop you from being an ass.

If this is too much, have a friend who can be an accountability buddy. Whenever you start to act up, have them call you on it. This takes a lot of trust, but it will work in building your self-awareness.

Immediately after the mess with my friend, I sat down with my friend Steve and talked to him. We talked about my main faults at the time, which seemed to be affecting all of my relationships. My almost narcissistic need for attention, a newfound quick wittedness that let me tease everyone around me to an unhealthy degree, and a predisposition to gross exaggeration.

Over the next few months I asked all of my friends to help keep me honest – they called me on my faults. If I became too validation seeking I’d receive a text on my cell phone, so they wouldn’t embarrass me in front of the group. They’d let me know if I was being a douche in my relentless teasing of whomever I was talking to at the time.

They’d call me on anything that seemed remotely exaggerated. I went so far as to seek professional help from my friends who run self-help companies as to advice on how to fix these flaws. Without all this help from my friends, I doubt I’d have fixed a majority of these problems.

3. You need to be hitting rock bottom to rise to the top

In the TV show “The Wire,” a character is seen at a support group for people addicted to heroin. He steps out of the crowd in front of everyone and publicly proclaims he wants to get clean. He speaks to the leader of the club, a former heroin addict himself.

This man states, “You need to see the bottom coming up at you fast before you can change yourself”.

This is entirely true. In order to stop a downward spiral, you need to hit the bottom or at least be aware of the fact that you’re headed down a bad path. Only then can you gather yourself together and rise back up.

You come back like a Phoenix. You will rise from the ashes as a better, stronger, and much wiser human being if you work towards becoming a better person.

Since this incident with my friend, I went from a hugely obnoxious asshole to a much more reserved and compassionate person. I’m by and large the same person, except for a few key changes.

That was my story of hitting rock bottom. Talk about yours below, and any lessons you learned from it!