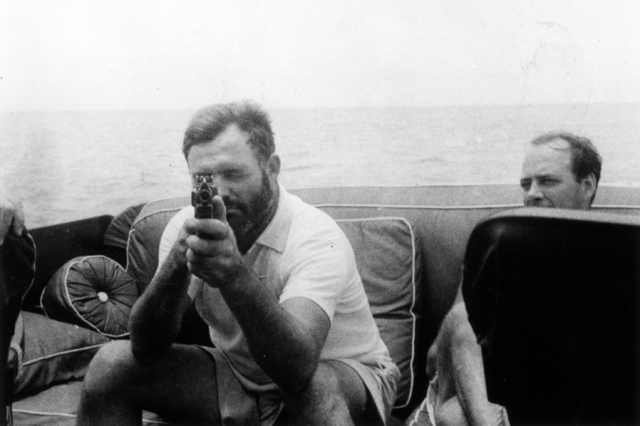 Ah, yes… Ernest Hemingway. Beloved author of classics such as “The Old Man and the Sea,” “For Whom the Bell Tolls,” and “The Sun Also Rises,” who also lived an amazing, adventure filled life that would be hard to describe in just a few sentences. It’s no wonder there are tons of Hemingway quotes that can provide infinite value.

One example of his adventures took place on a fishing trip in 1931, where he fired a submachine gun to ward off sharks that wanted nothing more than his catch of the day. During the entire ordeal he also shot both of his own legs, proving the man had his priorities in order.

Still not convinced that Hemingway was just the ultimate man’s man? He used to hunt for German U-boats, equipped with a submachine gun (again) and hand grenades. It’s never mentioned whether or not he found any, but let’s assume he did for the sake of his reputation.

The FBI also may have caught on to his crazy misadventures. It’s been reported that the bureau had an open file on Hemingway after World War II. They suspected Hemingway of having close ties with Cuba and there were rumors afloat that he shared friendship with Fidel Castro. Tragically, the FBI’s surveillance of him may have driven him to suicide.

Regardless of rumors and his crazy antics, he is indisputably one of the greatest writers ever. Hemingway is the paradigm of what a man strives to be. He was fearless, passionate, and just the right amount of insane (arguable.) His words were profound not only in literature, but through his core beliefs. Here are 10 wonderful Ernest Hemingway quotes.

Nothing is perfect the first time

“The first draft of anything is shit.”

Guess how many times I’ve had to revise this article? Hemingway is right, the first draft will always end up terrible. No matter how skilled you think you may be or how much heart you bleed into your writing, it will be terrible if you don’t put more effort.

There is always going to be something that can be improved or maybe you’ll catch a mistake in the second run through.

This goes for anything in life, the first time is guaranteed to be terrible. How do you improve at anything? Only through the second, third, and thousandth try do you become a master. Even then, there’s room for more growth, never stop growing.

If Hemingway can’t create perfection in one go, neither can you.

Use life’s hardships to grow

“The world breaks everyone, and afterward, some are strong at the broken places.”

Life is hard, that much is clear. Everyone struggles through it and even those who seem to be cruising had to work somewhere.

Maybe you’re entirely cynical and think that there are people who have the perfect life without lifting a finger, that’s fine. That doesn’t make Hemingway’s words any less true.

After all the trials that life has to offer, there are some people who take advantage of the challenges to become stronger individuals. They use pain and shortcomings to mold themselves into the perfect, ideal self and to never repeat the same mistakes.

You should strive to be part of the group that only comes out stronger even at their lowest. I believe I’ve grown the most during times I felt like I was at my lowest. I felt no one was there for me, but I used those emotions to power through and become something great. Learn from your mistakes and from the harshness that life throws at you.

Learn to trust others

“The best way to find out if you can trust somebody is to trust them.”

It’s hard to trust. Trust is such a rare gift that many take for granted. Often after having so many people abuse trust, you can become cautious of trusting new people. I know how it feels. I spent four years in a row not letting anyone in, trusting absolutely no one. Then one day I let someone in and I’m glad I did because ever since then, I’ve been accepting many others inside with no regret.

You have to take the leap of faith and trust others because  you can’t live on your own. Isolation is no way to live life because life is hard enough as it is. I was miserable when I tried to live that way.

If you’re unsure whether or not someone deserves your trust then there’s only one way to find out. It’s impossible to make accurate assumptions and life needs more people who are willing to open up.

Intelligence comes at a price

“Happiness in intelligent people is the rarest thing I know.”

This quote is very interesting and may have several interpretations. Perhaps those gifted intellectuals find that all things they take on seem to yield no sense of challenge, or maybe intelligent people see what is going on behind the curtain and they are often hard-pressed to find others who share the same views.

Either way, I agree with the quote in its broadest sense, intelligence comes at a cost. It makes you reflect upon life and ask if you’re truly happy. What does it mean to be happy or to fit in with others? Intellectuals don’t share the same thought process as most people and they can feel alone due to these differences. The lonely intelligent people, roaming the world through a unique lens.

“As you get older it is harder to have heroes, but it is sort of necessary.”

The older you are, the more you realize that it is hard to come across genuinely good role models. That is a scary realization because life only gets tougher as well, making you rely more on these heroes.

Cherish the heroes you have in your life and note down the qualities of these great people. Figure out what the commonality between them is and explore the world for more heroes. If the great Hemingway couldn’t do it alone, then good luck to the rest of you who want to go through life alone.

What would have happened if Hitler, or any other horrible well-known figure, had grown up elsewhere? Hypothetical situations like this are interesting to wonder about but it shows the importance of the upbringing; there is something that went wrong somewhere.

Even if you don’t believe that everyone is born innocent, you can’t deny the impact of environmental factors and the effects of parents.

Hemingway reminds you to create a positive environment that encourages positive personal growth because he believed we’re all born innocent. Look into your own past. How did you turn out to be the person you are today? No doubt, your upbringing played a major role.

“Every man’s life ends the same way. It is only the details of how he lived and how he died that distinguish one man from another.”

No one lives forever, no matter how badly you may want to. The stories they will tell of you will be about the adventures you went through as you lived and breathed. They will recount your moral characteristics and will praise you for the way you treated others.

They will romanticize your passing and say you were a great person regardless of its validity. So why not be the best you can be so these details of your life will live on in truth? Focus on self-improvement so when the time comes, your tales will be as beautiful as it is true.

Give your actions meaning

Make sure everything you do is defined and can bring measurable success. Don’t settle for less and assume you’re making progress just because you’re moving around. Give your life meaning with action and don’t fake it because you still need to remember how to be yourself. Don’t look busy, be busy.

Live for something great

“Fear of death increases in exact proportion to increase in wealth.”

Very profound and he does not exaggerate. Who wants to lose what they’ve built up? I believe this to be an accurate assessment that those who invest in the tangible want most to hold on to it. You have to keep in mind you can’t take your material possessions with you after you die. Live for a greater purpose, live for self-improvement.

You may not believe in an after-life, but you can still leave a positive effect on those who knew you when your time comes. Learn how to stop worrying about losing the unnecessary things such as your wealth because none of it matters in the end.

I’ve talked about the importance of listening before. Most people are too involved with their own stories and want to speak of themselves. They forget to listen.

Listen more than you talk. Break it down into percentages if you have to. 75% listening and the rest you can have for talking.

I’ll admit there are times that I forget to listen as well and all I want to do is boast. Then I snap out of it and realize that everyone wants to feel special and so I listen. I smile, I nod, I let them know that their words do not fall on deaf ears.

Hemingway was a brave and wise man who thought philosophically. Are you going to let his words go to waste? Take action and learn from his experiences.

If this resonated with you then please leave a comment below to start a discussion.

Question: What do you think Hemingway was most right about?