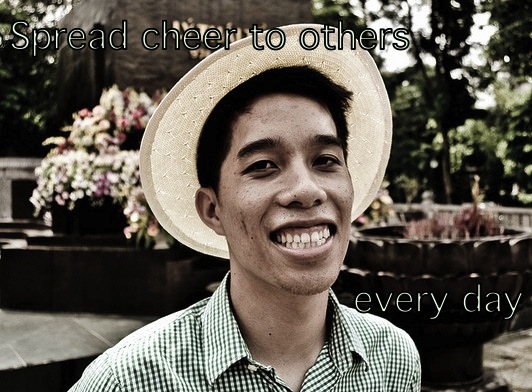 How often do you consciously try to be selfless and focus on someone else’s happiness? It’s difficult to remember that the entire world does not revolve around us and that we need to give and put into the world just as much as we expect to receive. Our mission to find the answers for ourselves to learn how to be happy makes us blind to others’ own feelings. Happiness is the universal currency and you can choose how you spend it.

Great Examples of Caring for Others’ Happiness

The other day, someone mentioned on a blog post that she noticed her husband was frustrated. Their washing machine had broken and this issue was causing unneeded stress to her husband as he tried to figure out how to fix it or purchase a new one.

Understanding the source of the stress, she selflessly took it upon herself to purchase a new machine without her husband’s knowledge. She didn’t do this because she was frustrated, but because she noticed that it was causing her husband’s happiness to be negatively affected.

Another example of selflessness came from today. I was at a Google event this afternoon and afterwards we all did the usual networking and exchanging of business cards.

I was talking to this man and he somehow went off-topic as he began talking about very random things such as dial-up internet and the technicalities of the past connections. I could tell he enjoyed talking and so I stood there smiling and nodding being sure to actively listen.

Truthfully, I have to admit I found the conversation to be stale because he spoke at a slow rate, but I didn’t want to be rude or to cut him off because I knew that would upset him.

What harm is it causing me to listen to this man talk about things he clearly enjoys? I treated him as if he was a guest in my own home because he was genuinely happy to be sharing with me. I made the conscious decision to favor his happiness and we parted ways with a “Great to meet you!”

You don’t have to go out and perform exactly the same tasks as the examples above, but there are several smaller ways to make someone else’s day just a bit better and they won’t cost you a thing.

1. Strike Up Random Conversation With a Stranger

My story that I used as an example wasn’t a random conversation, it was a networking event with someone who I happened to have not known. Regardless, most people love conversing and it’s even better if they get to see a new face. In public settings, it seems like there is absolutely zero conversation among strangers. It’s dead silent.

People are glancing at their phones, the walls, the ceiling, ANYTHING to avoid eye contact with a stranger who may, God forbid, say hello.

Why? They do this because they’re used to not talking to people they don’t know. What I’ve learned through the years actually differs from what I originally thought.

I used to think people hated random conversations. Why else would they avoid it?

Actually, that’s the problem right there.

They’re thinking the same thing as everyone else. Their inner dialogue is telling them not to because others will find them bothersome.

Guess what? People LOVE talking to strangers. The moment I look at a stranger and smile, their eyes light up. Then once they get started talking, they never want to stop even as we part ways. You can argue that it’s not exactly selfless to talk to others, but it is if you do it simply because you know they love it. Spread happiness with your interactions.

If you don’t feel like you have the courage to talk to a stranger, simply smile and greet them with a wave or a simple hello.
Do you have any idea how many people pass by others without receiving a single hello each and every day? I’m willing to bet that not a single person even gave them eye contact either (unless they were paid to.)

Receiving a simple sign of acknowledgement from a stranger can easily brighten their day because most of the time, people feel unnoticed.

I know this for a fact because I see the sadness in people’s faces as they walk alone. All it takes is a simple hi and for some reason, it seems like they’ve just received the greatest news.

You know how this makes me feel in return? Like a superhero whose superpower enable global spreading of happiness wherever I go.

3. Listen More Than You Talk

This one doesn’t require a random stranger because this goes for anyone. Even though you should be practicing this anyways, it is sometimes hard to remember that others want to be heard.

I talk about active listening a lot, but it’s powerful. There are a lot of people out there who are used to just sitting there waiting to speak, but the other individual is just dominating the conversation while leaving no room for a reply.

When you talk to others, listen at least 60% of the time (the more the better.)

The people in your life will appreciate it and you can brighten their day, everyday.

Like number two, you don’t necessarily have to strike up a conversation at all. Just notice something about someone and genuinely compliment it.

Perhaps they’re wearing something interest such as bright green pants and you happen to like it. Let them know! People love compliments about things they put the effort into doing. Sure, it’s great to compliment their big, blue eyes, but they didn’t make the decision to have those eyes today!

If you notice someone doing something amazing or you admire the way in which they go about a task, let them know you think that they are doing an amazing job. Compliments go a long way and it can only spread some happiness to those sharing the Earth with you.

5. Ask Someone If They Need Help

For some reason, society has bred people to be afraid of reaching out for support. Everyone is supposed to be some sort of self-reliant superhero who can carry the weight on his or her shoulders.

If you have even the slightest suspicion that someone may be feeling down or is struggling, just ask for help. They’ll most likely tell you everything is fine, but they will feel better just because you showed you care. It’s powerful and you can’t ignore it. People want to feel like they’re there.

How do you go about spreading happiness every day? What small things have you done in the past that you can see through their eyes as having a huge significance? Feel free to share in the comments and spread some positivity.