Stoicism, my favorite philosophy, is what I believe to be the ultimate self-help ideology. It contains amazing techniques that can be practiced for exponential happiness. 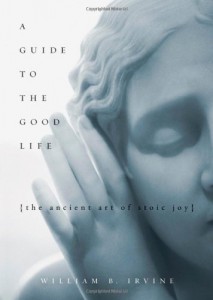 The book that guided me through Stoicism and gave beautiful examples of its techniques was “A Guide to the Good Life: The Ancient Art of Stoic Joy,” by William B. Irvine. Mr. Irvine does a wonderful job of modernizing Stoicism and debunking common misconceptions.

Contrary to their dictionary definition, they are not emotionless individuals who wander around bored out of their mind like robots.

Note: if you choose to buy the book through the link above, I will receive a very small commission (around 40 cents.) I put that advertorial link in nearly half a year after I wrote this article. I strongly do believe this book is amazing and am not merely trying to sell a product and monetize.

Irvine’s book got me through some rather dark times where I doubted myself and everyone else. It gave me a deeper understanding of life and provided insight into my own psyche; it rose me back up when I was at my darkest hours and shaped me into who I am today.

In a nutshell, negative visualization is the periodic practice of imagining the worst-case scenario almost at all times. You should mentally picture losing the ones you cherish the most and imagine being at your lowest.

You may think doing this would raise a pessimist out of you, but in actuality Stoicism forms full-grown optimists who don’t take things for granted, but instead love every second of life’s fortunes.

One of the examples from the book contrasts two fathers. One father plays with his daughter and obviously loves her, however, he does not spend every second truly treasuring her current presence. To him there is always tomorrow to spend time with her. The second father knows that life is short and fleeting. He truly loves his daughter as much as the first, but he does not take a moment for granted as he constantly and consciously thinks about her mortality.

Now tragically both daughters have passed away. The first father is miserable and is a complete train wreck, feeling guilty for having taken her presence for granted. The second father, emotionally damaged as the first, can take solace in the idea that he took advantage of every second he could with his beloved daughter and mentally prepared for her passing on a daily basis. There was nothing he could have done that had not already been done.

This practice makes you realize you are very fortunate to be enjoying your current possessions, whether material or psychological (you could be insane and mentally broken.) You begin to hold what you have in higher value as you’re living life and you begin to be grateful for everything while simultaneously preparing you in case of tragic loss.

One of my favorite concepts raised in Irvine’s interpretation of Stoicism is the idea of the hedonic treadmill or hedonic adaptation. Did you ever wonder why when you buy new electronics, new clothes, or whatever you wanted at the time, you slowly begin to fall back to where you were in terms of happiness and excitement? You feel like you have to buy something and falsely believe that you will be happier in the long run.

Perhaps a lot of you may realize this by now, but research shows that even lottery winners are no happier than they were before winning as the years go by, even less than a year at times. You gradually get adjusted to this new baseline of desires and your new wants start coming in. You buy more and more, hoping to achieve happiness. You’re simply running on a treadmill. You’re never satisfied and you’re insatiable just like I was.

Stoics broke this cycle by thinking in terms of a glass half-full, not half-empty. They are grateful to even have a glass in the first place! Then they break this cycle by wanting what they already have.

Irvine argues that this method works for everyone and not only those who are living comfortably already.

Another concept is the trichotomy of control. Irvine actually came up with this idea and modified classic Stoicism’s dichotomy because he saw flaws in it. Classic Stoics divided all of life’s events into two categories: things you can control and things you cannot.

Now how does this apply to self-improvement? How often have you been worried about something that was out of your control, completely ruining your contentment? The Stoics say to focus only on things you can control, or as Irvine would say, focus on that as well as things you have some control but not complete control over.

For example, things you cannot control are what others may think of you and why the weather is the way it is. Why beat yourself up about others’ opinions when you’re powerless to control it? It is just as silly as being angry with yourself for mother nature’s doing. It is simply out of your control. Focus on things you can control such as deciding what to do today or consciously improving as an individual.

As for the third section of the trichotomy, a tennis match is a great example. You can train to be your best, but regardless of you trying harder than ever before someone may be better than you and still defeat you. In this case, you have some control but not complete control as these situations can go either way. Situations like this you may give it your best, but do not beat yourself up if you lose.

You can clearly see how Stoicism can make you a master of your emotions. If you find these ideas to be interesting I strongly urge you to buy Irvine’s book. There are some more methods discussed and he dives into much more detail than I do. It’s a great self-help philosophy and I hope this article encourages you to consider it. Are there any other philosophies that you know of that is great for self-improvement? Please let me know what you think of philosophy in general in the comments and feel free to ask any questions you may have.